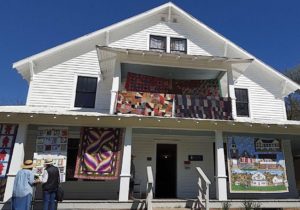 The Appalachian Women’s Museum is located in a house constructed in 1908 and occupied by the two Montieth sisters for the duration of their life. The homestead was  obtained by a group of individuals determined to establish a museum to portray the accomplishments of the women from the western North Carolina mountain region. Volunteers have donated hours of labor and a small fortune in contributions to renovate the house and groom the landscape. The remaining significant capital project is to replace the roof which was installed with the original construction in 1908. To accomplish that WBHN Radio has partnered with the Museum for the “Music On The Porch” event on Saturday September 14th from noon till 5:00 P.M. The focus will be a celebration of the life of “Aunt” Samantha Bumgarner who in 1924 became the first woman to record music for a wide audience. Bumgarner was recruited by another Jackson County entrepreneur Dr. John R. Brinkley from Cullowhee to travel to Del Rio Texas in the early 1930s to perform on his “Hillbilly Hollywood” radio show which was heard in Canada, all over the United States, and most of Mexico on his million watt radio station.   The “Music On The Porch” will feature a performance by the Deitz Family which has a direct connection to Samantha Bumgarner. As a young musician Sylva fiddler Harry Cagle performed with Samantha Bumgarner on Brinkley’s radio station. Later in life he performed with individuals who are now members of the Deitz Family.  Also performing at the event will be Susan Pepper, The BarnBillys, and Kornbreak Kreek. There will also be several food trucks at the event including the Chili Chomper, Brew Dogs and a brew tent sponsored by Balsam Falls Brewery.  Advance tickets are $10.00 and $12.00 at the gate. Children under 12 and under are admitted free and the event will be held rain or shine. Advance tickets can be purchased at the Appalachian Women’s Museum website