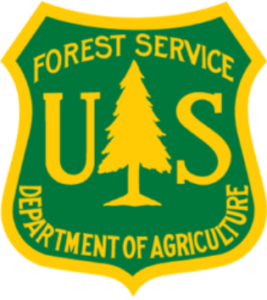 Firefighters continued to make progress on the two fires near Fontana Lake in Graham County. The Flint Gap Fire is now at 387 acres and 90% contained. The Left Loop fire remains at 20 acres and is also 90% contained. Both fires are burning on US Forest Service land on the Nantahala National Forest Cheoah Ranger District.

The Flint Gap Fire is burning in the steep slopes in the Meeting House area above Fontana Lake. Yesterday, firefighters completed containment lines around the fire. The fire area grew considerably within the containment lines yesterday, fueled by dry, windy conditions. Burn out operations also led to an increase in the fire size, as firefighters used back burns to remove the unburnt fuels between the active fire and the containment lines. Today, firefighters will continue to hold containment lines and burn out any remaining pockets of unburnt fuel as needed. 10 US Forest Service firefighters are on scene.
Interior burning within the Flint Gap Fire containment lines is expected to continue through the weekend. The public can expect to see smoke in the area until the next significant rain event. The fire is 90% contained at 387 acres, and no additional fire growth is expected. The cause remains under investigation.
The Left Loop fire is burning along Lake Fontana near the Tsali Mountain Bike trail complex. Firefighters are continuing to monitor the fire and extinguish any remaining hot spots near the containment lines. The fire is 90% contained at 20 acres, and no additional fire growth is expected. The cause of the Left Loop Fire was determined to be a lightning strike.
Fire danger is high across Western North Carolina. Conditions are predicted to remain dry and windy through the weekend, further drying out the leaves, sticks, and logs that fuel wildfires. The public is urged to use caution in any outdoor burning.
Fire restrictions remain in effect for the Nantahala and Pisgah National Forests. Building, maintaining, attending, or using a fire or campfire is prohibited. Possessing, discharging or using any kind of firework or other pyrotechnic device is also prohibited. These restrictions are in effect until August 8, 2020, unless rescinded earlier due to changed conditions.
Review the National Forests in North Carolina website for updates and more information at www.fs.usda.gov/nfsnc, on Facebook at www.facebook.com/nfsnc, and on Twitter at twitter.com/NFsNCarolina.